Joseph Smith lived his life with one foot in the present, the other in the past. That is, in order to effect a ‘restoration,’ he had to know what from the past had been lost in order to restore it.

It’s evident from the abundance of information he bequeath the church that he had a profound understanding of the past. In fact, his entire journey as a modern prophet began because he sought in vain for the original, primitive church. The gold plates entrusted to him contained the ancient history of at least two migrations to the New World long before Columbus. The Egyptian papyri, which he explained with self-assured confidence and considerable accuracy at a time when scholars knew little or nothing about their meaning, dealt with an ancient culture with a rich heritage that scholars are still trying to fully fathom.

One could go on for pages, listing his research into and exposure to the past.

So, ancient history played a huge role in the prophet’s life and career.

Given that fact, it would be natural to expect that if anything closely approximating what this author affirms about dramatic changes in the heavens and the earth occasioned by past planetary catastrophes, Joseph would have had something to say about it.

In fact, this was the question that prompted one of the early searches this author initiated into ancient history: Did Joseph Smith describe a world in the past that was in any way notably different from the one we know today?

The search yielded a wealth of evidence, some of it direct, some of it anecdotal, that, indeed, Joseph knew of and taught about a very different heaven and earth than the one we see today.

“… I cannot conceive how … a race of people … could cherish the idea that they could actually reach the sun, moon, or one of the stars simply by piling brick upon brick and stone upon stone.

“But the Prophet Joseph Smith, whose job it was to shed light upon the darkness of this generation, is said to have declared that it was not their intention to reach heaven, but to reach Zion, which was then suspended in mid-air between heaven and earth, or at such a height as to render the project feasible. This certainly is more reasonable.”

Orson Pratt, another Apostle, amplified on this idea, saying, “About the time of Abraham, the Tower of Babel was built. … They thought that the City of Enoch was caught up a little ways from the earth, and that the city was within the first sphere above the earth; and that if they could get a tower high enough they might get to heaven where the City of Enoch and the inhabitants thereof were located.”

Of course, we have the Philo Dibble illustration, presented to him by Joseph Smith, which gives us a virtual picture of Earth in a tandem arrangement with other planets that makes the above statements meaningful. 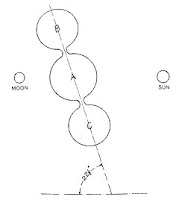 This was Joseph’s vision of what the ancient heavens looked like, what Elder Orson Hyde called “one grand constellation of worlds,” a concept that he undoubtedly learned from Joseph.

This picture of the ancient Earth with its companion planets explains the following statement by Apostle Orson Pratt: “The Prophet Joseph once in my hearing advanced his opinion that the Ten Tribes were separated from the Earth or a portion of the Earth was, by a miracle, broken off and that the Ten Tribes were taken away with it, and that in the latter days it would be restored to the Earth or be let down in the polar regions.”

Fast forward to the present, and we find that most Mormons today know nothing of such accounts because they seem extravagant, far-fetched and implausible in light of the modern, scientific model of our solar system. They simply have not taken the time or made the effort to learn all that Joseph Smith taught. And LDS scholars have simply avoided quoting such observations because they don’t fit the “scientific” or “logical” worldview we embrace and are therefore an embarrassment or an enigma to them. So, they avoid them entirely.

Yet, as it turns out, the very information to which LDS intellectuals have an aversion is actually what the Prophet believed.

It can correctly be said that we Saints today live with both intellectual feet firmly planted in the present. Our motto seems to be, “Forget the ancient past,” a position diametrically opposed to our founding prophet’s perspective.

Even when studying the scriptures, we mostly restrict ourselves to an analysis of their content for a spiritual message. We rarely strive for a contextual, temporal picture of the ancients’ world in order to more fully understand the perspective offered in their writings. Instead, we tend to spiritualize what we don’t understand; we substitute spiritualized explanations to fill the gaps in our understanding. Hence, the entire study of the gospel has become an exercise designed to give everything a spiritual meaning, entirely ignoring the temporal side of all the scriptural accounts.Try suggesting to any modern Latter-day Saint that a thorough study of antiquity is necessary to understand the restored gospel, and you will note how their eyes glaze over, their brain switches to the ‘off’ mode and they start looking for the exit sign.

Given the unbounded interest of their church’s founder in the past, one must ask, “What’s wrong with this picture?”