The first and perhaps most crucial key to prophecy was revealed in this dispensation by Joseph Smith when he spoke on the subject of scriptural imagery.

"The prophets do not declare that they saw a beast or beasts, but that they saw the image or figure of a beast. Daniel did not see an actual bear or a lion, but the images or figures of those beasts. The translation should have been rendered 'image' instead of 'beast,' in every instance where beasts are mentioned by the prophets." (History of the Church, p. 343.)

Joseph’s use of the term "image" makes his meaning clear. Similar terms used by today’s scholars are "icon," or "symbol." In this context, all three words mean the same thing. That is, the images they saw were icons, not representations or pictures of the actual animals or creatures. Rather, what they saw were substitutes for the animals or beasts named.

An example of these "beasts" from Daniel, cited by Joseph Smith, may help to clarify. "The first was like a lion, and had eagle’s wings … and was made stand upon the feet as a man …." (Daniel 7:4.) 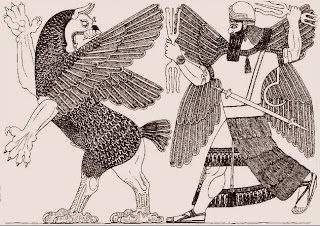 Here is that very "image of a beast" that conforms to Daniels description. It is a lion with wings and it stands erect. It is the mythical Babylonian "monster" Tiamat, which, coincidentally, corresponds to Daniel’s Babylonian era.

So, these images Joseph referred to are the icons of ancient cultures. "When the prophets speak of seeing beasts in their visions, they mean that they saw the images, they being types to represent certain things." (Ibid., p. 343.)

The profound importance of this bit of information becomes clear when we consider that "images" were the very things that the ancients venerated. When we look at Hebrew, Egyptian or Babylonian religious art, we are confronted by nothing but images and symbols. They are everywhere in ancient cultures, overwhelming and mysterious. 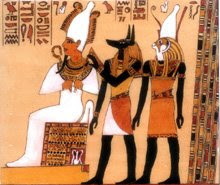 Beasts aren’t the only images in prophecy. We read of kings, stars, mountains, highways, temples, locusts and women as well, to name just a few. Drawing on Joseph’s statement, we can infer that all these are meant to convey meaning and not depict real creatures, individuals or objects. Instead, they are meant to symbolize or represent cultural gods and traditions that were well understood by the people of their era. 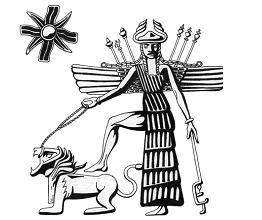 Open the quintessentially prophetic book of Revelation, and what leaps out at us, given this new perspective, are some of the same images we see on the walls of ancient temples and monuments. This is a key to scriptural iconography that almost everyone has missed, even though Joseph Smith made the connection, albeit obliquely.

For example, in that same sermon, the prophet mentioned Daniel’s vision of a four-headed beast. One looked like a lion, another a bear and the third a leopard. The fourth he described as a "dreadful and terrible," beast with ten heads. John apparently described seeing the same beast, although his description varies slightly from Daniel’s. "And I stood upon the sand of the sea, and saw a beast rise up out of the sea, having seven heads and ten horns, and upon his horns ten crowns, and upon his heads the name of blasphemy." (Revelation 13:1.)

Further, John also described seeing aspects of the leopard, bear and lion in his beast. (Revelation 13:2.) This suggests that they were describing the same images.

And John added this peculiar detail: "And I saw one of his heads as it were wounded to death; and his deadly wound was healed: and all the world wondered after the beast." (Revelation 13:3.)

Astoundingly, this beast—wounded head and all—was depicted in Mesopotamian cylinder seal art hundreds of years before John and Daniel described seeing them in vision. 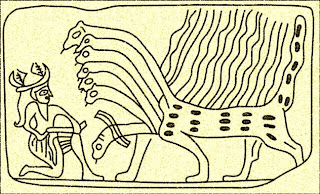 Here we see the Babylonian dragon Tiamat, clearly the archetype of John’s and Daniel’s beast, doing battle with Marduk. Note that this illustration predates John and Daniel, meaning that these images were borrowed by the Hebrew prophets.

Other examples of this link between ancient imagery and prophetic imagery are found in Ezekiel, Revelation and Abraham.

Most stunning of all to Latter-day Saints is that these same four “beasts” can be seen in Facsimile No. 1 in the Pearl of Great Price, where Joseph describes them as "idolatrous gods," further confirming our thesis.

Some beasts of prophecy are virtually identical to the four images on Egyptian funerary jars, seen here beneath the couch on the Joseph Smith papyri.

We tend to think of scriptural imagery as unique, something completely separate and apart from that of other cultures and religions. But the above examples, and many more like them, amply demonstrate that this is not so.

The prophets’ sacred imagery drew its symbolism from the same sources as the idolatrous imagery of the pagans, hence the conspicuous similarities between mythological imagery and scriptural imagery.

As it turns out, we have been repeatedly exposed to these images. We simply failed to recognize them in the scriptures because our mindset told us they were images of things from the future, not the past.

Thus, we see that while the visions of the prophets may have been about the future, the imagery they employed was already ancient in their day.

So it is that we must first look backward in time to learn the meaning of those ancient symbols before we can properly attempt to interpret their use in visions of future events.

This is likely what Peter meant when he wrote, "We have also a more sure word of prophecy …." (2 Peter 1:19.) That is to say, the images of prophecy were well established and understood in his day. Then, for clarity, he added, "Knowing this first, that no prophecy of the scripture is of any private interpretation." (2 Peter 1:20.) In other words, guessing — the preferred method of modern interpreters — is out.

Of course, to know the meaning of these symbols, "…they being types to represent certain things," as Joseph said, we must learn their source and what they meant to those who held them sacred.

Rather than borrowing the imagery and symbolism of the pagan cultures, it might be more correct to say the pagan imagery descends from the same truths that they once had in fullness.