The Keys to Prophecy 4: Of Beasts and Men

Ancient monuments, temples, tombs and sacred texts are replete with strange, mysterious symbols and creatures. By comparing those symbols to the verbal imagery of prophecy, we learn that they gave rise to even more bizarre language.

A comparison will allow us to see how one gave rise to the other.

Take the vision of John, for example, in Revelation. He described seeing four distinct creatures.

Ezekiel, too, saw four creatures in a similar setting.

The lists of creatures are identical, save that Ezekiel named an ox where John listed a calf. This is understandable given that the two prophets were separated in time by about 600 years, allowing for a slight 'shift' in cultural symbolism.

Of course, the universal mistake made by Bible scholars of all epochs is to assign some fantastic meaning to these symbolic creatures — especially in John’s vision because he says these creatures surround the throne of God in heaven. In truth, the two prophets are probably describing something far more mundane, but quite remarkable, as we shall see momentarily.

Most revealing is the fact that these four creatures are not unique to the Israelite religious tradition. They figure prominently in the religions of neighboring cultures — the Egyptian, for example, where we meet them face-to-face in funerary art. They are called "canopic figures." Curiously, human figures with the heads of beasts dominate Egyptian art. They are one of the most obvious features of their religious iconography.

Named after Canopus, an area in the Nile delta region, these jars were funerary furniture used to house various organs of the deceased during internment rites. The four creatures were said to be the sons of Horus. 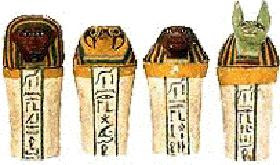 The Egyptians employed the heads of a baboon and a jackal rather than the Israelite ox (calf) and lion. This variation is typical from culture to culture and across time, just as the names of the same gods varied. But there is no mistaking that the four creatures seen in prophetic vision also adorned the burial art of Egyptians for hundreds, perhaps thousands of years.

Ezekiel is more specific in his description of the four. "Also out of the midst thereof came the likeness of four living creatures. And this was their appearance; they had the likeness of a man." (Ezekiel 1:5.)

So, these four looked like men with the heads of beasts, which is exactly what we see here. 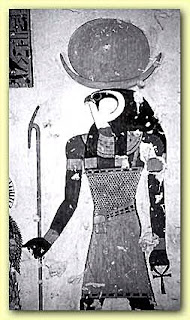 Anthropomorphic creatures — animals with the body and limbs of humans — figure prominently in Egyptian religious art. Curiously, this is the same thing the prophets describe seeing in their visions. Ezekiel described them as "living creatures" with "the likeness of a man," which is exactly what we see here. 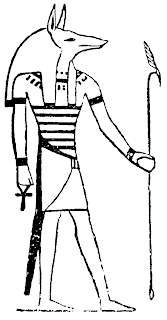 Israelite tradition prohibited the use of such symbolic masks, thanks to the Ten Commandments, so these did not exist in the Israelite culture. Nevertheless, these four creatures figured prominently in their traditions, as we’ve seen in the visions of John and Ezekiel.

More interesting still is the fact that these same four creatures are also found in the Pearl of Great Price. Two of the facsimiles copied from the Joseph Smith papyri show these same four canopic figures, described as four "idolatrous gods."

Significantly, most of the images for which Joseph provides explanations turn out to be planets and stars, suggesting that these four also represent celestial objects. This, as it turns out, is a key that will be explored in a subsequent installment in this series.

As we have seen previously, the Israelites often strayed into pagan beliefs and practices. It should hardly be surprising that these four 'gods' of their neighbors should show up in the system of symbols Israelites held sacred.

What is not generally acknowledged is that the language of prophecy also draws on these types of well-known images from antiquity.

While this explains the imagery of only a few passages of scriptural prophecy, these two, Revelation and Ezekiel, are among the most mysterious. This comparison clearly points out the mechanism of describing sacred images in narrative form: prophetic imagery is drawn from ancient images or idols.

While this may be a surprising turn of events, this takes some of the mystery out of prophetic imagery.