In order to understand gospel symbolism, one must understand its ancient origins. No one has done more in modern times to make this understanding possible than Dave Talbott, comparative mythologist and researcher extraordinaire. Rather than rehearse his findings here, I refer the reader to his writings, beginning with his Saturn Myth. Others of his writings can be found in the online newsletter, “Thoth,” which can be found at www.kronia.com, along with some more recent publications.

For those who have my books, you can find a summary of his views and their value to our understanding of gospel symbolism in volume 3 of The Prophecy Trilogy, “And There Shall Be A New Heaven And A New Earth.”

Talbott’s principle thesis presents us with an entirely new view of Earth’s ancient heavens, one that explains all gospel symbolism. When the ancients looked up into the heavens, this is what they saw during an early period of the evolution of the “grand constellation of worlds,” as Apostle Orson Hyde put it — a concept he undoubtedly learned from Joseph Smith. 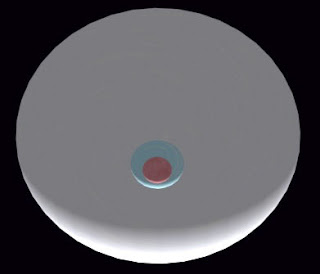 The larger of the three orbs was Saturn, the turquoise-colored orb in the middle was Venus and the smaller, red orb was Mars.

Here is yet another view so there is no confusion about the planetary arrangement we’re talking about, the polar configuration also pictured in Joseph’s illustration given to Dibble (see Part 4). 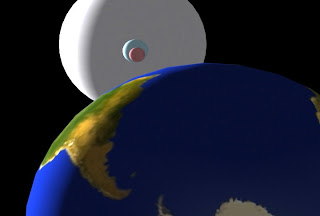 When Joseph’s facsimiles and the Book of Abraham are considered in light of Talbott’s Saturn thesis, we see that Kolob may be simply another Egyptian name for the Saturn/Venus/Mars assemblage of planets during Earth’s earliest epoch. Those three are likely the three planets Joseph Smith drew for Philo Dibble.

In the Egyptian tradition, Re/Atum is Saturn. He is the father-god, the fixed, immovable sun god. The hat-heart is Venus, the female goddess who is everywhere in ancient mythology identified as the mother goddess. The ab-heart is Mars, the male warrior/hero/child who resides in his father’s eye, the ‘apple’ of his father’s eye. (Again, see Talbott for a thoroughgoing explanation of these concepts.)

The entire polar configuration was seen to rotate once every 24 hours, due to Earth’s rotation. Hence, the verb form of qalb, meaning “to turn over and over” is most appropriate. Additionally, the Latin Venus was called Verticordia, the turning or whirling heart.

In fine, Joseph’s declaration that Hah-ko-kau-beam (ha-kokab-im) are stars was accurate. The etymological connection between kokab and Kolob indicates that both have the meaning ‘star.’ Kolob also has the additional meaning of ‘heart,’ an otherwise odd association with the word ‘star,’ except in the context of the Saturn myth and the Polar Configuration.

Wonderful blog! I found it while searching on Yahoo News.
Do you have any tips on how to get listed in Yahoo News?
I've been trying for a while but I never seem to
get there! Thanks