The Keys to Prophecy 7: A New Heaven, a New Earth

Our culture knows nothing of the incredible changes wrought in the heavens anciently. This is so because of our 'scientific' view that there have been no significant changes in the solar system's arrangement during recorded history.
But the scriptures and the prophets are insistent, in spite of our beliefs: The heavens have repeatedly changed throughout ancient history. This is a primary message the ancients and the prophets sought to convey to us across the millennia.

The result: Our modern ignorance of the true past blinds us to the unanimous declarations of our distant ancestors.

The concept of sweeping changes in the sky and the earth are found everywhere in the scriptures. For example, in the Doctrine and Covenants we read, "And the end shall come, and the heaven and the earth shall be consumed and pass away, and there shall be a new heaven and a new earth.

"For all old things shall pass away, and all things shall become new, even the heaven and the earth, and all the fullness thereof, both men and beasts, the fowls of the air, and the fishes of the sea." (Doctrine and Covenants 29:23, 24.)

Also, "And I saw a new heaven and a new earth: for the first heaven and the first earth were passed away; and there was no more sea. (Revelation 21:1.)

Perhaps the apostle Peter said it best when he spoke of the Deluge, explaining that it was the defining event that changed the 'old heavens' into the sky we see today. "For this they willingly are ignorant of, that by the word of God the heavens were of old, and the earth standing out of the water and in the water. Whereby the world that then was, being overflowed with water, perished: But the heavens and the earth, which are now, by the same word are kept in store, reserved unto fire against the day of judgment and perdition of ungodly men." (2 Peter 3:5-7.)

Then, he went on to further explain that a similar change was in store for us in the last days. "But the day of the Lord will come as a thief in the night; in the which the heavens shall pass away with a great noise, and the elements shall melt with fervent heat, the earth also and the works that are therein shall be burned up." (Ibid. 3:10.)

We read the same sort of language in the texts of all ancient cultures, where we find the pervasive, ever-present fear that something terrible that happened in the past would repeat itself in the future. Indeed, all ancient cultures relate that there have been dramatic changes in the heavens, calling the epochs in between "ages" or "suns." The Greek philosopher Hesiod associates these ages with various metals, as does Daniel in his Old Testament vision of the statue with a head of gold, a torso of silver, belly and thighs of brass and legs of iron.

These fearsome changes were universally attributed to stars or planets in the form of gods, goddesses, beasts or serpents. Surely, then, Joseph Smith was correct to call these images of the ancients "stars" and "planets," as we have seen.

Even our language retains this key. The words for world-changing cataclysms are catastrophe (cat-astro-phe) and disaster (dis-aster). Both bear the same 'astr' root as the names of the primary goddess/stars of antiquity: Aster, Astarte, Ashtoreth or Hathor. In fact, one interpretation of the word "disaster" is literally "from the star."

This the ancients feared above all: destruction from the stars that changed everything. No wonder they were fiercely dedicated sky watchers, including prophets like Abraham, preoccupied with the motions of planets and stars. No wonder they endlessly adorned their texts, temples and tombs with symbols and metaphors of star gods, goddesses and beasts derived from the appearance of those planets.

But because our culture and science turn a blind eye to these declarations, Latter-day Saints frequently fail to appreciate the many statements by Joseph Smith that echo the beliefs of the ancients: Planets and stars are the origins of almost all scriptural and prophetic imagery.

That’s why those images dominate the exterior of LDS temples, just as they did their ancient counterparts. Our temples reflect both realities, the past and the present heavens. Stars and planets on the Salt Lake Temple reflect an ancient, customary obsession with the heavens. On the west wall buttresses, near the bottom of the photo are Sunstones. In the middle are the stars of the constellation Ursa Major, the Big Dipper. Immediately above those is a repeated pattern of circles within a ring, called Saturnstones by Brigham Young. 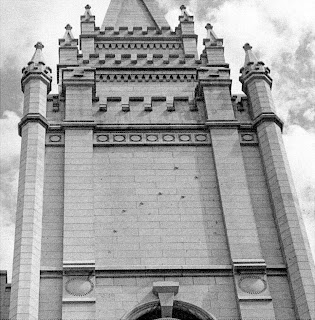 The prophets, both ancient and modern, understood this key. So should we.