The Keys to Prophecy 5: Stars and Planets

Up to this point in our examination of the many clues to the extravagant images of prophecy, we have learned that we need not look to mystical texts or veiled mysteries for our answers. Nor have we found that the answers lie in interpreting prophetic imagery with modern eyes.

Instead, we have found the answers in a more mundane source, in the scriptures and in ancient history — evidence that has been hiding in plain sight all along.

We discovered that the dragons, man-beasts, women, kings, angels, stars and other odd images encountered in the scriptures are but descriptive word pictures of the images that the ancients worshipped, the same icons seen in ancient temples, tombs and monuments. We have seen that the imagery of prophecy and mythology spring from the same, ancient source, hence their similarities.

The next step is a bit larger leap of logic, but a crucial one: What do those images represent?

Looking at the Egyptian gods, we often see large circular icons on their heads, what scholars call "sun disks." The juxtaposition of the disks and the gods is extremely meaningful.

For example, in a common Egyptian theme or motif, Ra (Re) is pictured seated in a bark or ship with a disk above his head. This same scene can be seen on Facsimile No. 2, Figure 3, in the Book of Abraham. 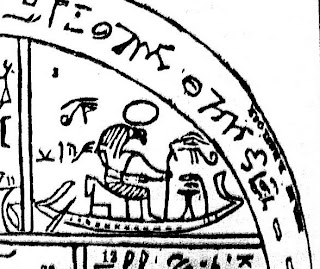 Scholars explain that the ancients were sun worshippers, so those disks must represent the sun. However, Joseph Smith contradicted that assumption when he gave us another key, and it has been before our very eyes for generations now.

As Joseph repeatedly asserts in his explanations of the Pearl of Great Price facsimiles, those disks and creatures represented planets and stars, not the sun. The only exception is in Figure 5 in Facsimile No. 2, first called by Joseph a "governing planet." He then adds the comment that the Egyptians called it the Sun, which is true of the late, corrupted Egyptian traditions his papyrus represented. But according to the earliest beliefs, her name designates this cow goddess as a star.

The cow depicted in Figure 5 was called Hathor, as we have seen. Along with her equivalents in other cultures — Astarte, Aster and Ishtar — her name bore the root 's-t-r' sound of our word 'star' (the 's' and 't' were pronounced with the 'th' sound in Hathor.)

Keep in mind that the ancients designated all celestial objects as stars. The word 'planet' (derived from the Greek 'planeta, meaning 'wanderer') is a recent invention, thanks to the telescope that allows us to differentiate between stars and planets.

Hence, Joseph Smith’s designation of a 's-t-r' goddess as a planet is symbolically consistent and extremely meaningful. He thus implies that the stars they worshipped were actually planets, the very thing the juxtaposed disks suggest.

Putting both the creature and the disk together — common practice in early Egyptian religious art — was symbolically accurate and a proper way to emphasize that they both represented the same thing, a planet or star. In fact, this was a functional way to label the figures, since most people were illiterate. Instead of text that read "star," those pagan gods often carried or wore a symbol that bespoke their astral origin.

Some of the more elaborately rendered disk images, painted and rendered in relief, look to be nearly virtual snapshots of planets, a few complete with a sun-lit crescent.

Joseph Smith’s explanation of disk images such as these was that they represented planets, which is what all such Egyptian disk images resemble.

Let’s look closely at how emphatic Joseph Smith was in his explanations of these disks and creatures.

Kolob is said by Abraham to be "the greatest" of the stars (Kokaubeam), but it is represented in Facsimile No. 2, Figure 1 by a figure Egyptologists identify as Amon-Re or Khnum, the creator-god, thus implying that the god was an astral body.

The baboons on either side have what scholars call "moon disks," presumably because of the crescent beneath the disk, placed over their heads in the traditional Egyptian manner. But these disks do not represent the moon any more than others represent the sun. Joseph insisted that they are "stars" in his explanation of Figure 5.

What becomes clear from this seeming contraction is that the objects the early Egyptians called stars would be called planets in our time. What we see, then, in the disk illustrations are not stars, but planets, complete with crescents. Only planets have sun-lit crescents, as depicted in ancient art, not stars.

Joseph Smith understood. He did not confuse the issue, as modern scholars do. Indeed, one can suggest that what looks like confusion at first blush was no mix-up at all. By freely substituting the two terms, Joseph honored the ancient tradition. He acknowledged the ancients’ reality that some of today’s stars, now mere pinpoints of light, were actually great, nearby planets in antiquity, which dominated Earth’s heavens and were worshipped by their ancestors as gods.

Indeed, this hypothesis fits much better with Abraham’s vision of the ancient heavens and Joseph Smith’s explanations of the facsimile images than any current view.