The Keys to Prophecy 9: Apollyon, the Destroyer

Like the histories of all ancient cultures, that of the Hebrews — the Old Testament — tells the very same story of sky-spanning marvels and manifestations that profoundly and directly impacted their culture and beliefs. Comparing the names of the pagan gods they worshipped supports this conclusion, as we have seen.

Having made that connection, we can now turn to the scriptural record to see how well that knowledge helps our comprehension of symbolism that otherwise seems unfathomable.

For example, Baal, a figure we see often in the Old Testament, was the god of the Canaanites, sometimes neighbors and enemies of the Israelites. From time to time in their history most Israelites worshipped him as well, to the dismay of the prophets.

Apollo was the Greek equivalent of Baal. In fact, the name is the same, altered only by linguistic preferences. The Greeks added an antecedent 'a' (a-baal), softened the hard 'b' sound to a 'p' and then added an 'o' ending (a-paal-o).

The conclusion: The Greeks worshipped the same sky god as the Canaanites and the apostate Israelites.

Although the Greek’s god Ares is more typically associated by scholars with the Roman war god, Mars, others insist that Apollo (Apollon/Apollyon) was also a Greek equivalent. For that reason, Apollo was virtually adopted intact from the Greek into the Roman pantheon. So, as we make cross-cultural connections of these gods, we learn that the Old Testament god Baal is the same as the Greek Apollo and the Roman god of war, Mars. 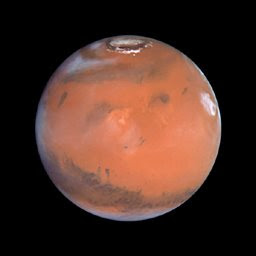 The planets in our solar system, such as Mars, were not arbitrarily assigned the names of mythical gods, as most suppose. The nine known planets bear the names of Roman gods and goddesses because some of them were the 'gods' that once stood near to or passed perilously close to the Earth, illuminating and dominating the ancient heavens as well as occasionally raining destruction on the world's civilizations.

These connections become particularly useful when we consider the following enigmatic passage from John’s vision. "And they had a king over them, which is the angel of the bottomless pit, whose name in the Hebrew tongue is Abaddon, but in the Greek tongue hath his name Apollyon." (Revelation 9:11.)

Earlier in that same chapter, it is a "star" that opens the bottomless pit. Of course, we’ve learned in earlier installments in this series that the ancients commonly called planets that once hovered near the Earth "stars."

Can you see where this is leading? John implied that, this "king," "angel" or "star" — Apollyon — was the planet Mars. This is the key.

Thus, we learn many things from John’s carefully worded explanation in these few verses.

Foremost, we learn that this "king," which is also the "angel of the bottomless pit" and the "star" that fell to the earth, is a planet. Thus, we must conclude that other references to kings, angels, beasts, stars and creatures in John’s account may be references to planets as well.

This tendency to use common images to describe celestial objects is still practiced today where star constellations are given names like Great Bear, Lion and Archer, and where the greatest star cluster is called the Milky Way. It’s a cultural tradition from antiquity, employed by John, which we preserve in the present.

It also fits perfectly with Joseph Smith's teaching that the beasts seen by prophets in heavenly visions are not beasts at all but "images" meant to represent something else. (For clarification of this, see "Joseph Smith's Marvelous Key.")

Also implied is the idea that the imagery of the entire vision draws heavily upon the cultural traditions of John's time, employing the sacred, "mythical" stories of those pagan cultures of the "seven churches which are in Asia" that John addressed in Revelation to explain the place of Christ in those traditions as well as events of the last days.

Thus, the images or icons embodied in those ancient cultural traditions are the keys to interpreting all the imagery of John’s enigmatic vision, Revelation. And so it is, too, with all the visions of the prophets recorded in scripture. Armed with these keys, which are an understanding of the meaning of that imagery, the most mysterious symbolism of the scriptures becomes easy reading.

In order to properly understand all these mysterious, symbolic references, we must know both what these traditions were and their origins. We cannot simply guess at their meaning, as do most modern expositors of prophecy. Such gratuitous speculation is commonplace, though dangerously misleading.

In order to grasp the meaning of prophecy, we must know as much about the past as we do the present.

Was it the Apollo, Challenger that crashed with a teacher on board?